Register for the Virtual Power Hour Round II- Finally Get Things Done!

What Does Power Mean to You?

Power means many different things to different people. For some, power is seen as corrupt. For others, the more power they have, the more successful they feel. For even others, power is of no interest at all.

The five bases of power were identified by John French and Bertram Raven in the early 1960’s through a study they had conducted on power in leadership roles. The study showed how different types of power affected one’s leadership ability and success in a leadership role.

Leadership within organizations is only attainable through the combination and use of power and authority. As discussed by John Kotter (1985, p.86) “power is the ability to influence others to get things done, while authority is the formal rights that come to a person who occupies a particular position, since power does not necessarily accompany a position.” Problems sometimes arise when power is imposed without the backing of...

According to Peter Drucker,  the man who is often credited with inventing modern business management writing 39 books on the subject.

One of my favorite business quotes is "If you can't measure it, you can't improve it."

We know it's nearly impossible to know whether you've met your weight loss goal without first getting on the scale and pulling out a measuring tape.  This allows you to acknowledge your phases of improvement.

Prior to driving to Jacksonville, Florida from Georgia last week, I thought through the 10 things I should consider in order to be successful at this book selling event.

BACKGROUND:  I was invited to serve as a Featured Author in the Literary Lounge at a conference sponsored by the members of Delta Sigma Theta Sorority, Inc.,'s Statewide conference. The conference attendees were members who resided in the...

10 Things to Consider When Showing Up For a Booked Event

As I pack my car for this weekend's Featured Author event, I wondered if I had considered everything that could make this a successful and worthwhile trip.

Booking a conference or meeting venue can create a bit of anxiety, especially the first time. In anticipation of being asked to present at hundreds of potential conference venues over the next few years, I put together 10 Things to Consider When Showing Up for a Booked Event.

The list of things to take into consideration are not in order of priority nor is this an exhaustive list of every single concept or relevant topic. 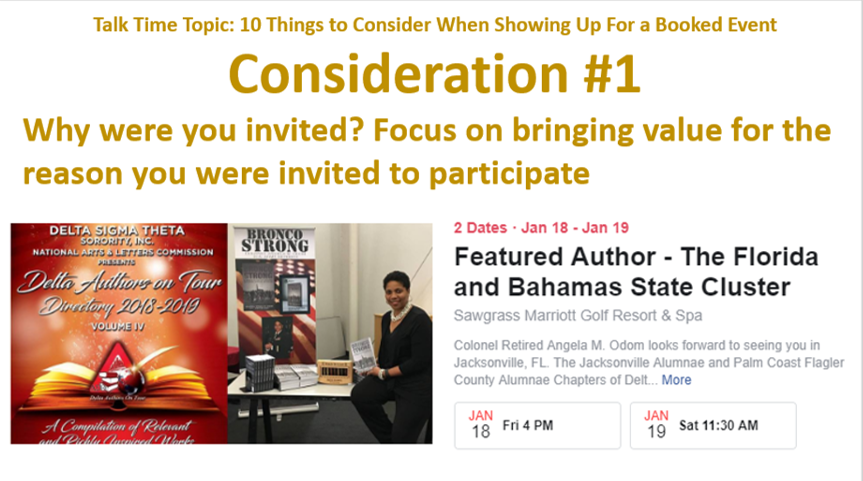 1. Why were you invited?

Focus on bringing value for the reason you were invited to participate. In order words stay in your lane. Ensure you are familiar with the overall mission and objective of the event. Determine where you fit and then show up and show out.

2. Before, During, and After Tasks

Take some time to document relevant tasks that you must accomplish in three different...

Women leaders hire me to teach them how to lead, themselves others, organizations, and processes. so they can achieve amazing results in their careers and thrive in their social environments. Ready for The Better U Project? You're in the right place.

Stay connected with news and updates!